Two young children have been raped in the Indian capital of Delhi, drawing strong criticism from the city’s chief minister.

Arvind Kejriwal accused the government and police of not doing enough to protect minors in the city.

The latest attacks come after a four-year-old girl was raped in Delhi last week.

Two years ago, India tightened its laws on sexual violence after the brutal gang-rape and murder of a student.

The responsibility for the Delhi Police comes under the national government’s home ministry.

“Repeated rape of minors is shameful and worrying. Delhi police has completely failed to provide safety. What are PM n his LG doing?” Mr Kejriwal said on Twitter.

He said the prime minister should either act or transfer the control over the police to the state government.

Police say one of the victims in the two separate attacks, a two-and-a-half year old girl, was abducted in west Delhi on Friday night by two men.

She was sexually assaulted before being dumped in a park near her home.

According to police reports, she was bleeding profusely when she was found. Tests showed she had been raped at least once.

“We have launched a manhunt for the suspects. So far no-one has been arrested,” west Delhi police chief, Pushpendra Kumar, told AFP.

In a separate incident, a five-year-old girl was gang-raped by three men in the east of the city.

Police say she was lured to a neighbour’s house where she was repeatedly raped.

Both girls are undergoing medical treatment but are believed to be out of danger, police said. 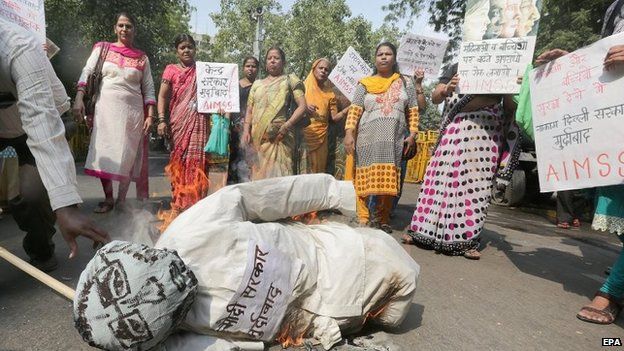 The incidents come one week after a four-year-old girl was allegedly rapedbefore being abandoned by a railway track in the capital.

The girl, who was found near her home in a poor neighbourhood in the north of the city, had been slashed with a sharp object and had severe internal injuries.

Police have arrested a 25-year-old man in connection with the attack.

The head of the Delhi Commission for Women, Swati Maliwal, has visited all three girls and said they had received horrific injuries that left them in an extreme amount of pain.

She said not enough was being done to punish those responsible for such crimes. Of 11,000 crimes against women registered with Delhi police in 2014, she said, only nine had been prosecuted.

“There is this complete lack of fear because if the convictions are not happening… if people are not having to pay the price for what they have done, then how is it that things will change in Delhi?” she told the BBC.

The latest attacks have caused outrage in the Indian capital, with many people taking to social media to express their disgust at the crimes.

The gang rape and murder of a student in 2012 in Delhi led to protests and new anti-rape laws in the country.

However, brutal sexual attacks against women and children continue to be reported across the country. Delhi alone had more than 2,000 rapes reported in 2014.